I Can See You Mister Hare

The story behind this engraving goes back to Spring 2013. Walking down into the fen with our, now deceased, lurcher Bella, I would often see a large buck hare in a field a few hundred metres from the studio.
I would see it in a field of young barley and, as the crop grew, I would see less and less of it.

The last time I spotted it, it had to sit up on its haunches to peer over the top of the barley heads and that was when, in my mind,  I "saw" the engraving that I wanted to make. I started by drawing a head: 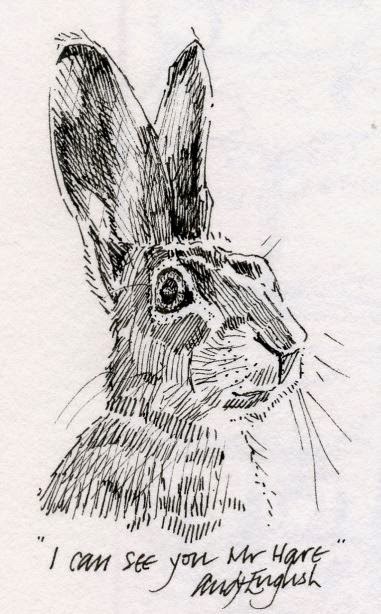 This was an engraving that I simply wanted to do for my own pleasure and so it had to fit in as and when I had a moment - the sort of thing I might work on while taking a break in a coffee shop: 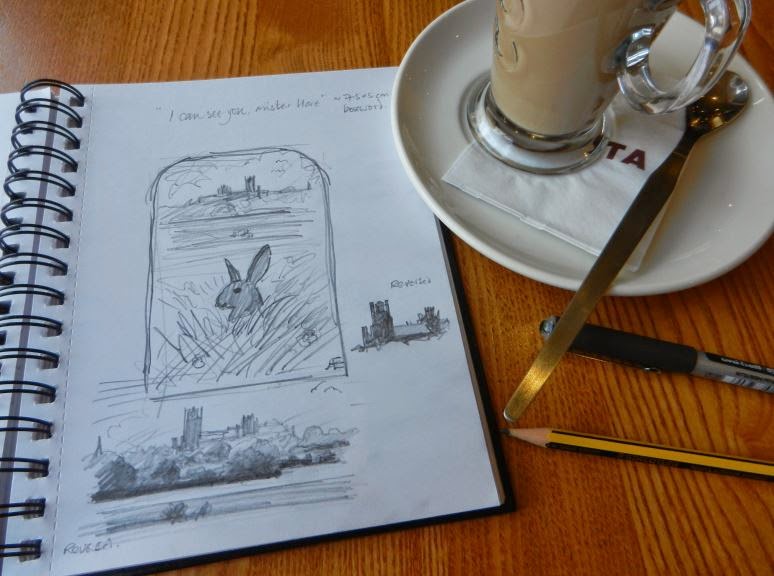 As 2013 became another very busy year, I set the project aside. However, it was the perfect thing to bring out when I wanted to demonstrate engraving. In July, I engraved the background view of Ely Cathedral during my Open Studio: 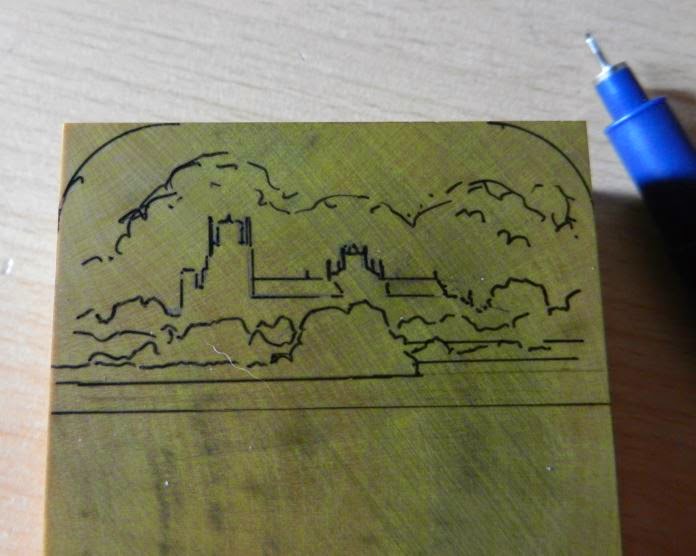 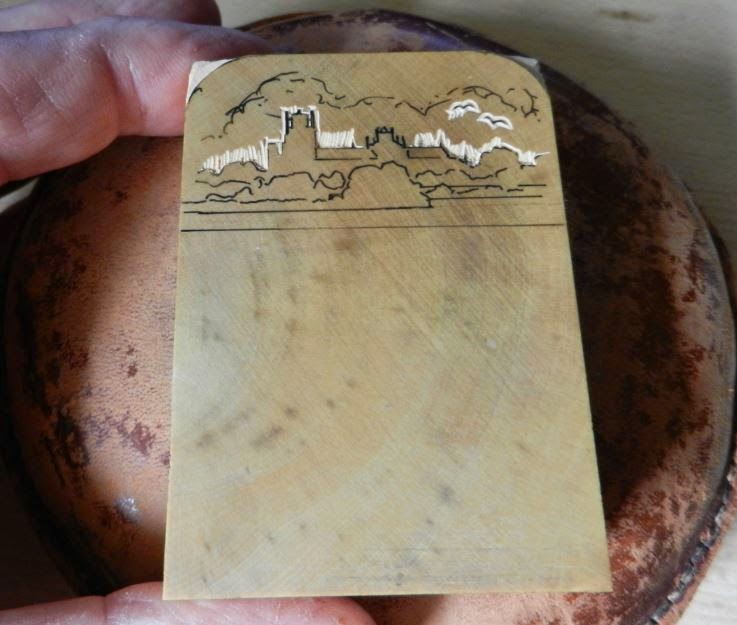 I like to carry out as many processes as possible by hand. I reduced a drawing of the hare by "squaring down" and transferred it to the block: 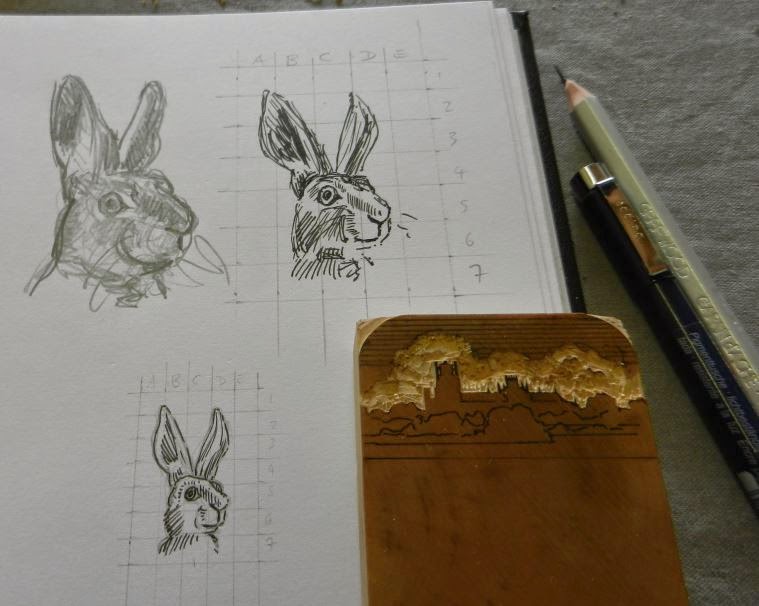 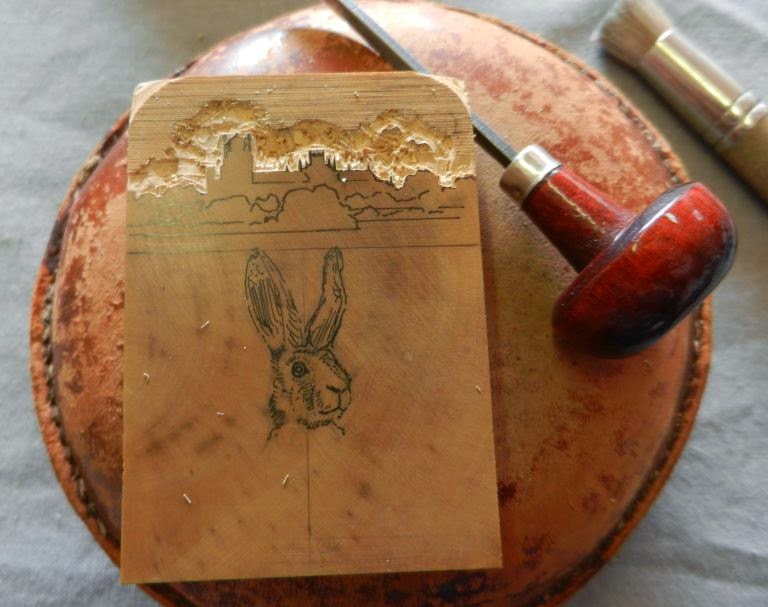 I didn't do much more until November. I completed the engraving of the background at the Fine Press Book Fair in Oxford. You can just see the block in this photograph of my table in "Parenthesis 26", the latest journal of the Fine Press Book Association: 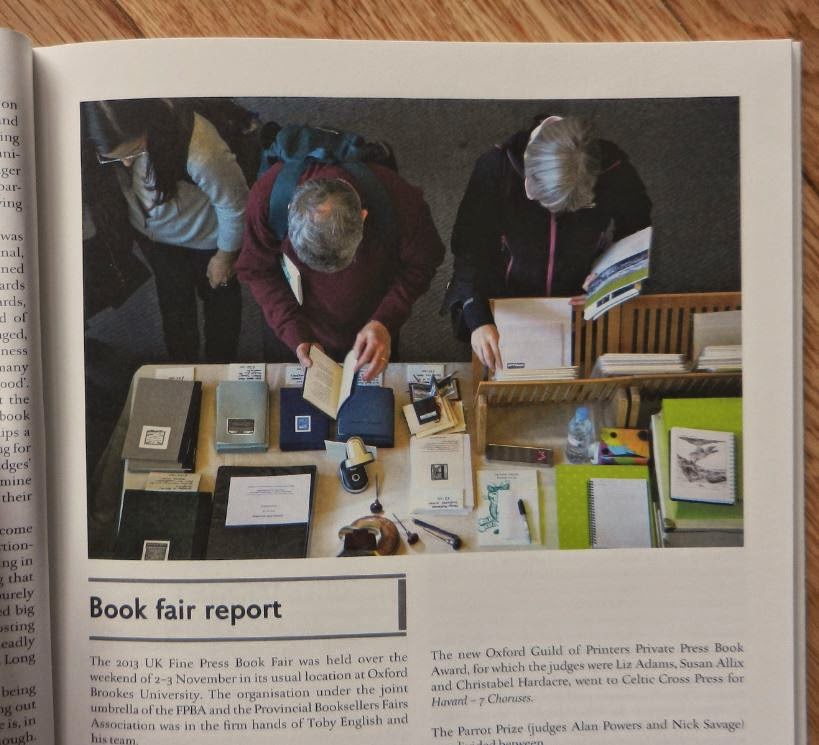 The next weekend, I was showing work and demonstrating in Ely Cathedral, which features on so much of my work: 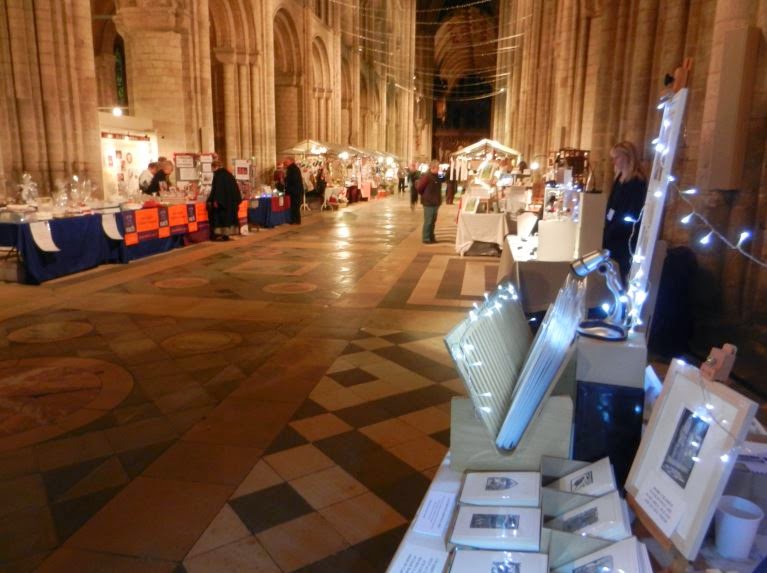 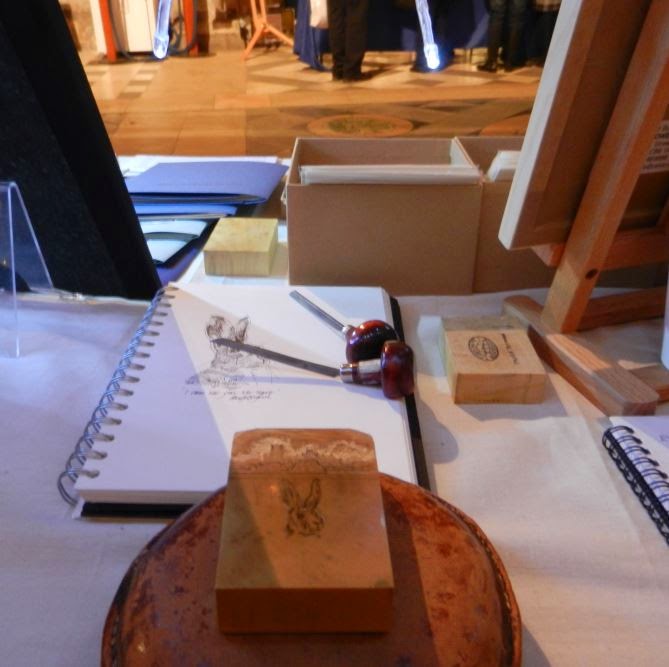 Conditions were not great for engraving, but there was just about enough light to start to work on the head of the hare.

I next picked up the block in early 2014 when I started to plan the barley that would surround the head: 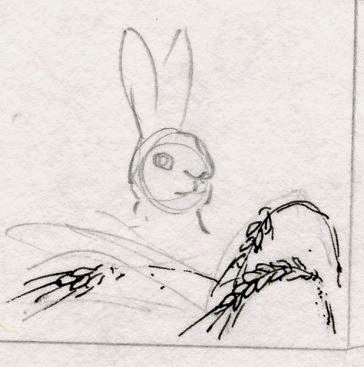 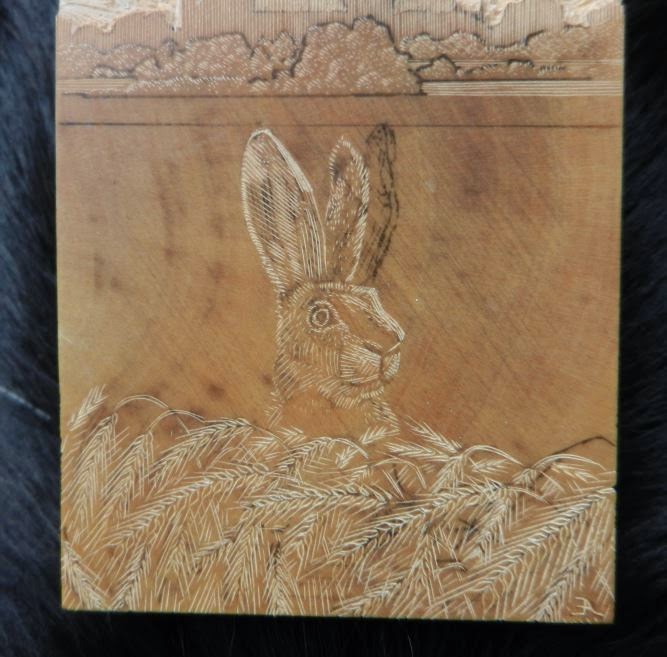 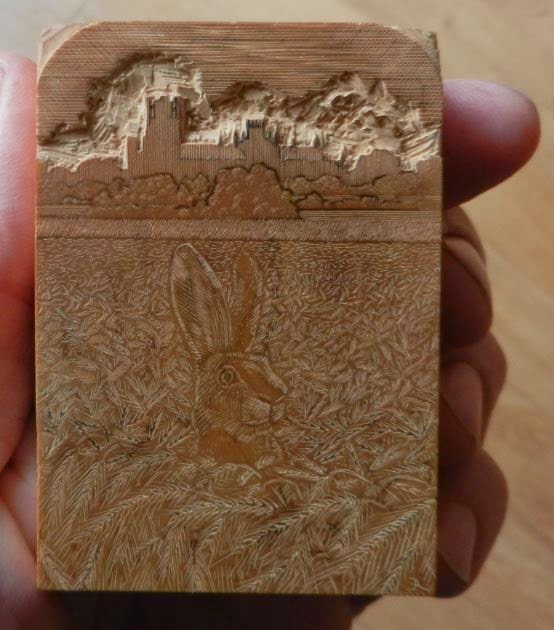 The block then sat in the studio until April, when I was demonstrating  engraving at Gallery Top in the Peak District. I completed the engraving by adding highlights to the grains of barley: 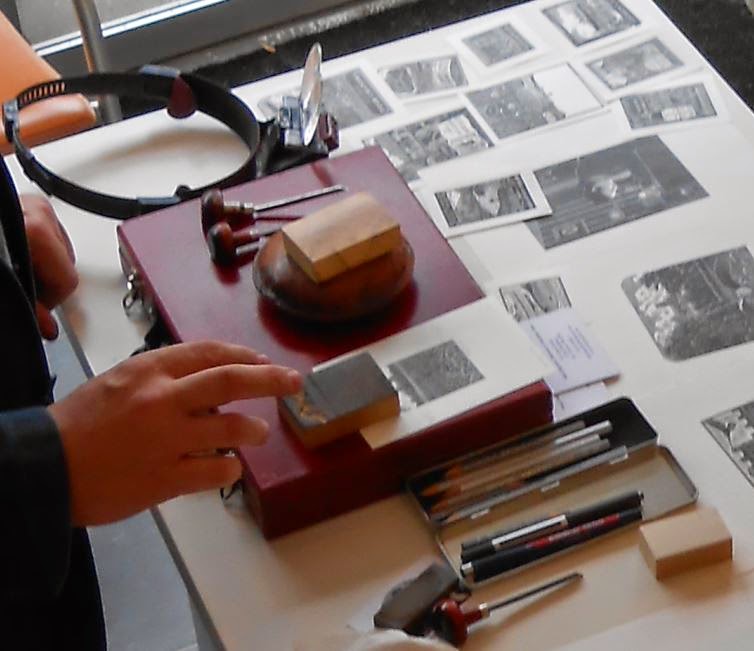 In May 2014, a year since I had planned the engraving, I finally started to print  the edition, ready to show for the first time at an art event in Bury St. Edmunds. This image has been with me on all of my artistic travels and many of you will have seen it as a work in progress. 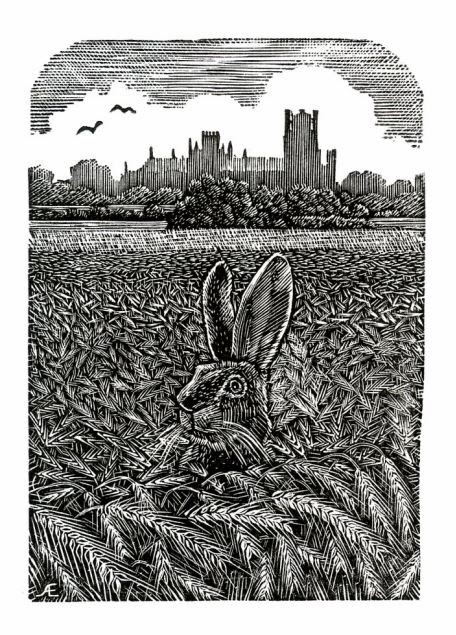 The image measures 73 x 52mm (approximately 3 x 2 inches) and it has been printed in an edition of 100 original artist's prints, pulled directly from the block in my 1865 Albion handpress.

I am selling this engraving for the relatively inexpensive price of £25.00.
You can purchase it from my website and from my Etsy store