I have some projects from 2010 that I have been meaning to share with you. Here is the first.

I have always had a fascination for netsuke. I love the wonderful combination of art and function that they can display; I also like that many of them are carved in boxwood - my material of choice for engraving.

Last year 2010, the BAREN group of printmakers organised "Inspired By Japan", a portfolio of prints to raise money for people affected by the earthquake and tsunami that struck on 11th March 2011. The prints were to be sold through exhibition as well as online. Most of the printmakers involved practice traditional Japanese moku hanga techniques but I sometimes contribute my own engravings to the print exchanges that BAREN organises and I wanted to take part in the fundraising effort but could not find a subject that seemed appropriate and also suited the technique of wood engraving. I knew that I wanted to include a fragment of a map of Japan but that was all I could come up with.

During a visit to the Victoria and Albert museum, I was examining a case of fine netsuke when it struck me that here was a theme that would work for me. Several of the netsuke had damp or watery connotations which would be interesting to engrave. I was particularly struck by a snail on a lotus leaf which a friend kindly photographed for me: 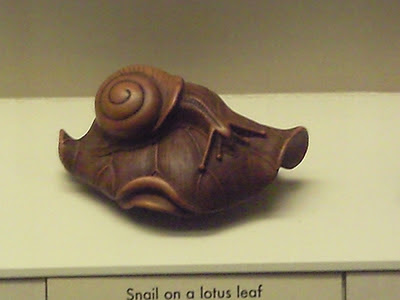 Back in the studio, I researched netsuke images and the snail was joined by a water buffalo, a duck/swan and an octopus. I had my design.

Unusually for me, I decided to engrave this work in maple. I had a block which I brought home with me from my visit as a guest artist to the Wood Engravers Network in Chicago. I had been waiting for a suitable project. 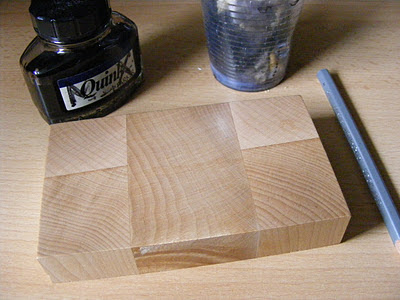 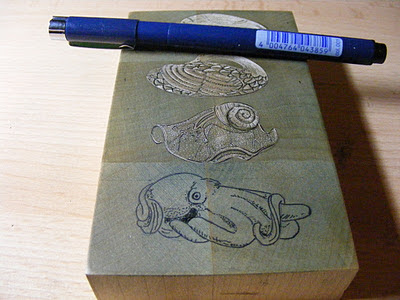 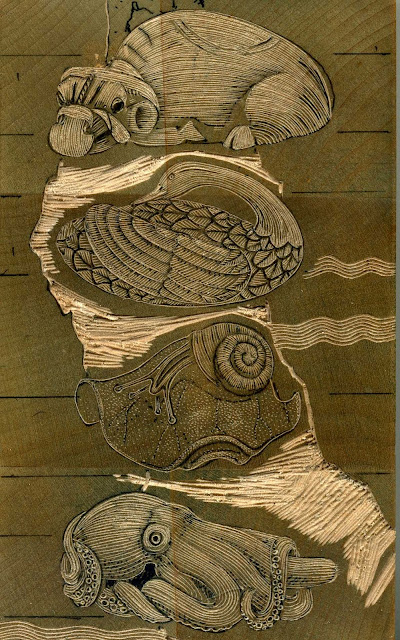 Here is a detail of the octopus: 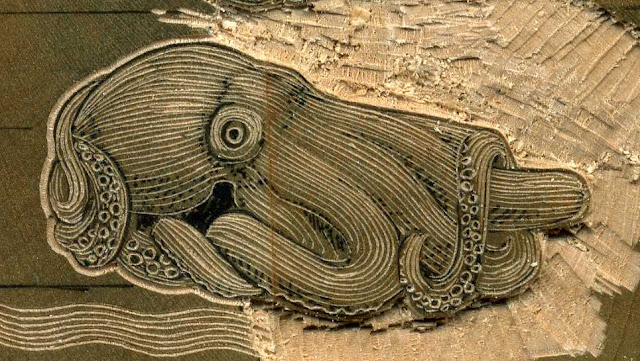 The background became a map of  the area of Japan where the earthquake struck shown as a white surrounded by engraved watery waves: 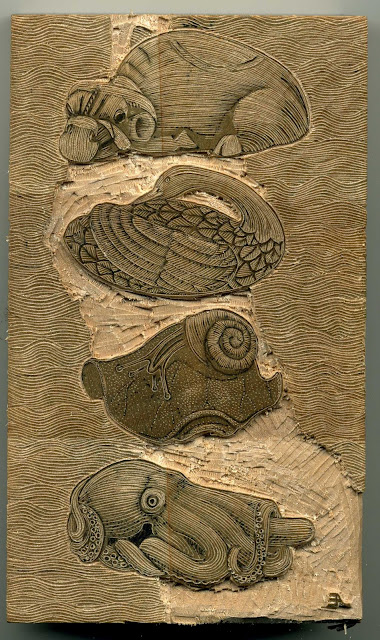 While I was engrossed in this task, I was being interviewed for a feature in the UKHandmade on-line magazine and a photograph takes at this time shows the work in progress: 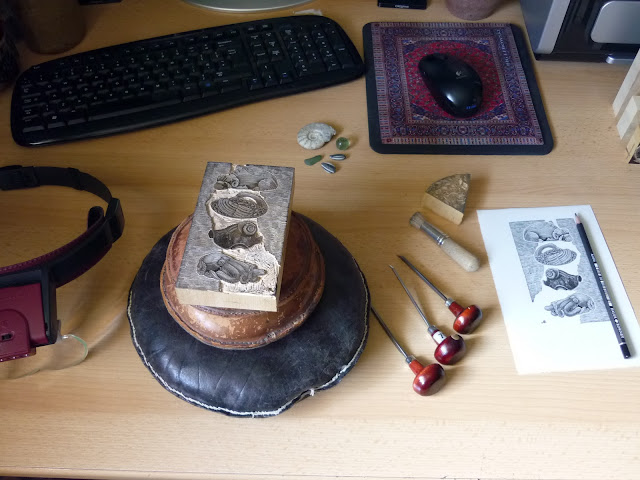 Here is the finished engraving after being taken through eight states: 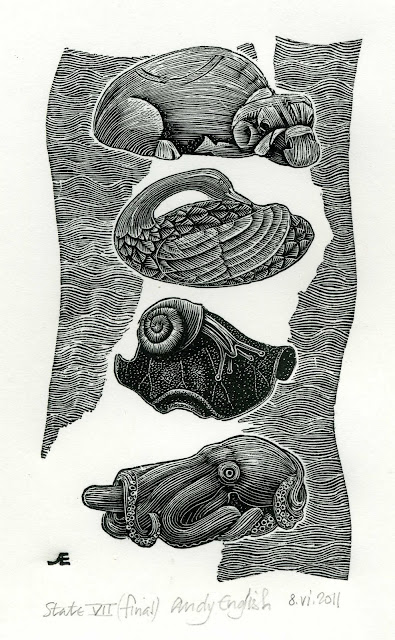 For a long time, I have been planning engravings with the theme of collection - either created by myself , other people or occurring naturally. This engraving seemed to me to fit into this group and I decided that the image would have a subsequent life, albeit in a changed form.

It seemed to me that the design was a little tall and unstable. This is a purely personal response but masking off the top of the image convinced me to take drastic action and I sawed off the upper portion and re-engraved the top, removing the water buffalo completely. 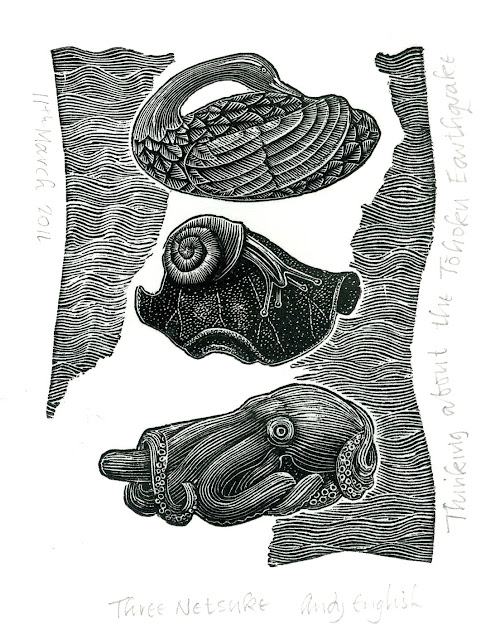 I have given this engraving the title "Three Netsuke" but then added text along the sides: "Thinking about the Tohoku Earthquake 11th March 2011". It has been printed in a smaller than usual edition of fifty. It has been accepted for the current Society Of Wood Engravers touring exhibition.

In Praise Of Ely

In Praise of Ely is a new 'Fine Press' book designed and printed by Chip Coakley at the Jericho Press, now located in Ely. I am lucky enough to have several Jericho Press volumes on my bookshelves; they are always interesting and well produced. I contributed an engraved press device to "Psalter Collects" (see here). I was pleased to be asked to engrave some small "spots" to decorate "In Praise Of Ely, part of a Latin text that has been translated into English verse by Janet Fairweather (whose translation of the Liber Eliensis is available here).

The verses paint a very pretty picture of Medieval Ely and I illustrated some of its glories with a series of small engravings.

I used a piece of resurfaced Victorian boxwood which I cut into several smaller pieces: 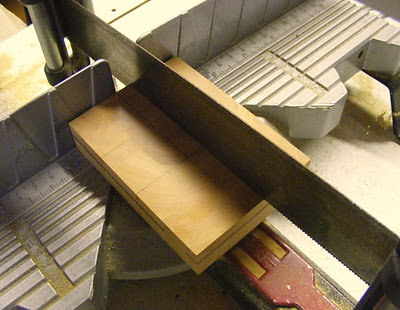 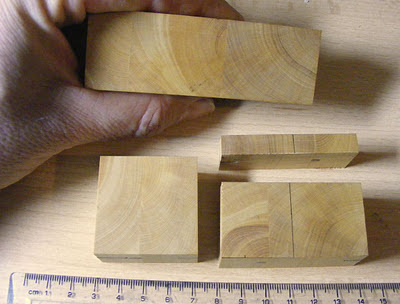 We started the work with a headpiece showing the early cathedral:

Another showed Norman arches inside the cathedral: 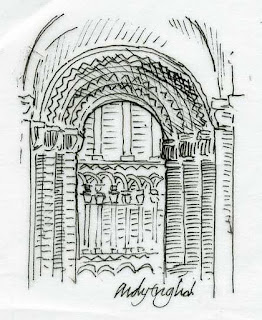 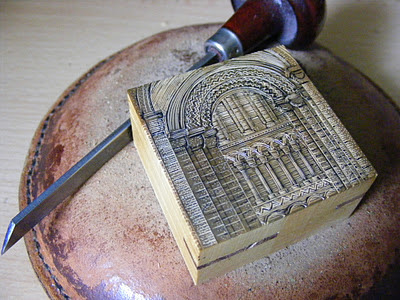 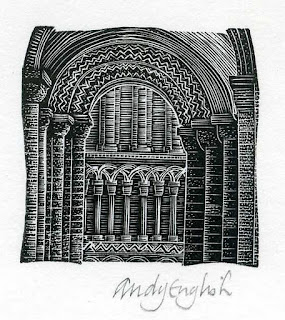 An engraving of an eel was made for the title page. Yet another showed bees around a skep and, finally, a tailpiece showed a heron with an eel. This was not specifically mentioned by Brother Gregory who wrote the original verses but it seemed to me to be appropriate: 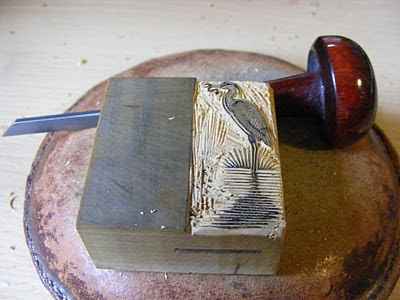 The book was printed at the Jericho Press in Ely in an edition of just 100 copies and the results are very fine. Here are some photographs of the finished book, nicely bound in green cloth.: 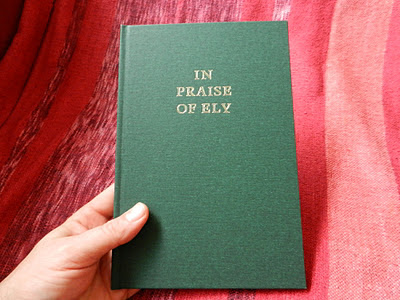 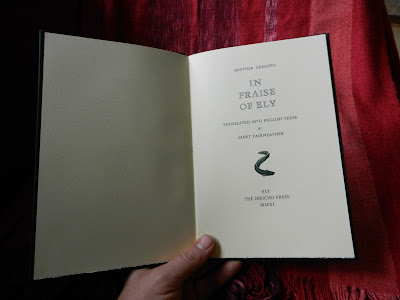 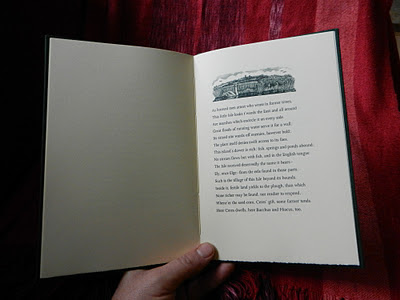 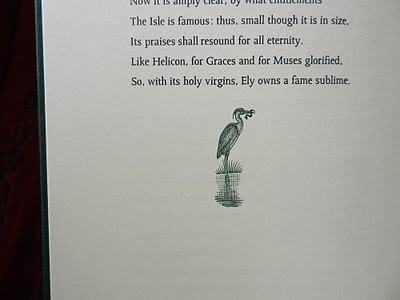 If you live near Ely, copies can be bought from Toppings, a very fine bookshop. You can also purchase the book directly from The Jericho Press:


Finally, a trial version of the title page eel that I engraved during this project, together with a signed proof pulled from it using my 1865 Albion handpress, is currently being offered on Ebay: 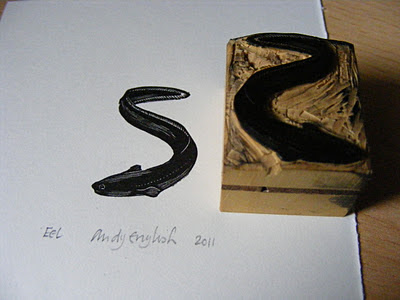